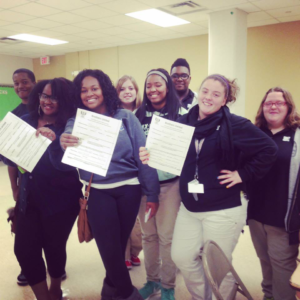 Peer Leaders for AIDS-Free Africa and America (PLAFAA) is a peer-to-peer collaborative program of Saving Orphans through Healthcare and Outreach (SOHO) designed to empower American youth to become active participants in the prevention of HIV/AIDS and STIs and be advocates for healthy lifestyles both at home and abroad. PLAFAA team members will work with peers of supporting churches and organization to reach their youth both prior to and after their trip to Africa.

Fourteen students representing six Central Indiana high schools have been undergoing intense training on HIV/AIDS prevention, STI and Substance Abuse Prevention, and the challenges of making healthy and wise life choices. After their trip to Swaziland, the students will be prepared to bring that training their home communities.

In the summer of 2015, the peer leaders, primarily from Christel House Academy and Crispus Attucks Medical Magnet High School, will set out on a mutual learning experience in Swaziland, Africa. After two weeks of peer education health clinics, humanitarian service and cultural immersion, the Peer Leaders will return to Central Indiana inspired, changed and prepared to be advocates for healthy lifestyle choices in the Indianapolis Community. 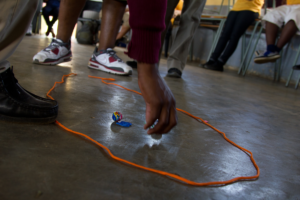 Swaziland is a country of natural beauty, but it is well known for its HIV/AIDS prevalence. Swaziland has the highest prevalence rate of HIV/AIDS in the world. The country has a life expectancy rate of 49 years, one of the lowest in the world. The population is young, with 39% under the age of 14. Nearly 125,000 children have lost a parent to AIDS. An estimated 15,000 households are headed by children raising their siblings by themselves.

Though Swaziland is far removed from Indianapolis, Indiana, both places share a common challenge: HIV/AIDS is posing an increasing threat to youth 10 to 17 years of age.

According to the Indiana State Department of Health, a total of 10,279 persons in the state of Indiana were living with HIV/AIDS by the end of December 2011. HIV-positive individuals get tested most often at ages 20-29, some with AIDS. Research shows that for some, infection may have occurred as young as between the ages of 10-19. Information from the CDC indicates nationally, the rates are increasing among 15 to 10-year-olds. In Indiana, 8% of new cases were children and youth ages 13-19.

WHAT DID THEY DO?

In collaboration with SOHO Swaziland, nongovernmental organizations and several academic institutions, the 14 Student Peer Leaders participated in the following:

Save Orphans, Kick AIDS and Abuse (SOKAA) is a gender-specific, culturally sensitive AIDS and abuse prevention program using sports as a vehicle to educate, engage and empower at-risk youth, equipping them with skills to improve their own lives and to serve as peer educators, impacting youth within their home communities.

Soccer is the most popular sport in the world and has engaged millions in skill development and the enrichment of lives. Even during moments of political, ethnic and socio-religious tension and feuds, nations across the world have united behind the sport.

As in all of South Africa, Swaziland life involves soccer as daily routine. Whether played with a homemade rag ball from the trash on a dirt field or a real soccer ball on a distant field, soccer is one of the few outlets to quell dark emotions of fear, frustration and grief that simmer in the hearts of teenagers. In a society where 67 percent of the rural population is below the poverty line, soccer is the sport and entertainment of choice because rubbish can be pressed into the shape of a ball, providing joy-filled moments even for the poorest of the poor. In a country where HIV/AIDS has destroyed the traditional safety nets and where children are growing up without a sense of permanence or community, soccer offers a hopeful prospect.

The SOKAA program will be a life-changing vehicle for girls, as much gender-based abuse occurs at the homestead, and sports gets girls engaged outside of their domestic environment. The program will encourage the kind of self-worth and confidence that would make a girl less likely to be victimized.

In all empowerment programs, testing would become as routine as wearing the “jersey.”

STRONG AS STEEL, YEBO! (SASY) is a Life Skills, Empowerment and Livelihood Skills  program for girls and boys.

Goals of the SASY program:

For boys and young men, the program is designed to:

THE STRONG AS STEEL CONCEPT

The SASY concept calls for use of a music medium as a tool for life transformation.

The instrument of choice is one with roots in Africa but quite popular throughout the Caribbean, the United States, parts of Europe and South America.  It is the steel drum, an instrument that grabs the attention of music-lovers but which does not require formal knowledge of music to develop proficiency.

Steel drums that are used as musical instruments are discarded oil drums trimmed, smoothed, etched, fired, and professionally tuned and chrome-plated until it becomes an attractive, pricey instrument. Steel band orchestras have performed at street corners, in cafes, in massive auditoriums and centers for the arts worldwide, and in the palaces of kings and queens. The music covers the spectrum from folk to calypso, contemporary, gospel, rock, hip-hop, jazz, the blues and classics.

It can be played in orchestras of 150 as well as in duos and trios, in schools as well as concert halls. It is the power of the symbolism that makes it also a dynamic tool for abuse prevention and recovery, and to teach AIDS prevention, self-esteem and the power of personal choice.  An instrument that begins as a discarded oil drum suitable for use as a trash bin, which experiences a metamorphosis that puts it alongside the finest instruments in both economic and performance value, is a suitable metaphor for at-risk youth marginalized by AIDS, abuse, poverty and hopelessness.

WHAT DID THEY DO?

In collaboration with SOHO Swaziland, nongovernmental organizations and several academic institutions, the 14 Student Peer Leaders participated in the following: